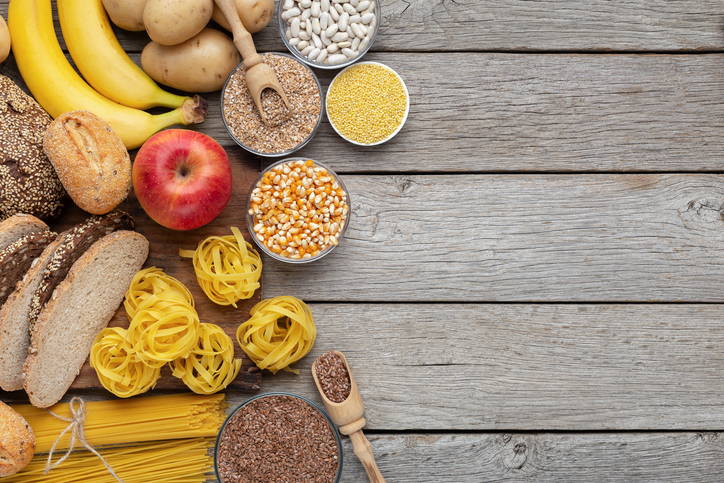 High amounts of carbohydrate right before a competition is, different to what most of us think, not necessarily the best strategy. In this article we give you an insight into different options for planning the right pre-race/match fuelling...

Historically, the pre-race/match meal has been shrouded in importance. Shunted on to a pedestal, to ensure that you sit down before the competition, and shovel down as much carbohydrate as you can handle. Potato waffles, beans on toast, copious portions of pasta – whatever it is, you need as much on board as possible right? Wrong.

The heavy lifting when it comes to carbohydrate loading should be done in the day(s) prior to the event, and other than a little top up beforehand to boost liver glycogen stores, and optimise blood sugar, we should be ensuring that the stomach stays light. Think muscles full, belly light! Carbohydrate is rightly the key player here, and for pretty much all forms of competitive exercise, it should be the cornerstone of your pre-competition strategies for ensuring that you are ready to perform at your best. By no means are fat and protein, irrelevant, but when it comes to fuel, carbohydrate is king and low glycogen (stored form of carbohydrate) stores at the start of exercise will most likely result in reduced exercise capacity and performance.

In endurance sports, we want to achieve high muscle glycogen concentration before the start of the event, and if the schedule allows it, this process should begin ~3 days out from said event (this obviously will vary depending on the duration and intensity of the competition but I’ll speak broadly). On the assumption that training has culminated by this stage, we should be aiming for an intake that is slighter higher of that than our normal training days. This over a three day period will aggregate together to ensure muscle glycogen stores are full to the brim, and put us in the best position to perform.

On the day of the event, that last fairly large meal should be consumed 3-5hrs prior to competition. In most cases, this tends to be breakfast, which carries increased significance due to the overnight fasting period, in which time the liver will be depleted of glycogen. This meal boosts carbohydrate availability in both the muscle and the liver, whereas any intake beyond this (in the hour prior to competing) won’t impact muscle glycogen, but will affect liver glycogen, and increase the delivery of carbohydrate to the muscle during exercise. Such meals should be carbohydrate rich, and should also tailor to both preference and familiarity for the athlete. Bread and jam or honey, cereal, porridge, bananas, canned fruit, and fruit juice are all carbohydrate rich options that can be easily digested in time for performance to benefit.

Intake <60mins prior to the event is best avoided. The potential onset of rebound hypoglycaemia, as well as gastrointestinal stress & discomfort, are heightened if food is consumed within close proximity to exercise, hence the importance of getting it right in the days leading up to the event!

An alarmingly high proportion of athletes in a variety of sports report that they have suffered from gastrointestinal problems at some stage during competition. There are a multitude of potential contributing factors, including those mentioned above, but here’s a few more that are worth keeping in mind:

If your event is over 45mins long, then carbohydrate intake during exercise may be worth consideration too, with improved endurance performance rife in the literature base in such circumstances, largely due to the exogenous carbohydrate intake creating a glycogen “sparing” effect at muscle level, enabling it to be saved for further down the line when it potentially matters most, but that alone is probably another blog in of itself.

Like pretty much everything, this is trainable! We can train our body to absorb and utilise higher levels of carbohydrate, thus minimising any gastrointestinal discomfort, and the likelihood of other ill effects touched on here. Depending on your sport the manipulation of carbohydrate intake can/should be periodised year-round, throughout training cycles and training weeks, to maximise adaptation, promote recovery, and ensure that your engine is ready to purr when the time comes. The “train-high” approach for one, can increase the gut’s capacity to absorb carbohydrate during exercise, thus reducing the residual volume in the intestine, and the consequential risk of gastrointestinal problems when competing, whereas “train-low” approach can upregulate the efficiency of other metabolic pathways that lend themselves to competition when carbohydrate is reintroduced sensibly.

Finally, it’s also important to consider your hydration strategies alongside your fuelling strategies both pre and during competition. A high fluid intake in the last few days before competition is encouraged, as opposed to drinking to thirst (thirst is a by-product of acute dehydration and so drinking to thirst is often retrospective action to the body’s already dehydrated state, so try and get ahead here). Adequate hydration plays a fundamental role in gastric emptying and absorption rates, amongst a whole other host of biological processes that are crucial to not only performance, but health too. Again, depending on the type and duration of the event, as well as the conditions it will be executed under, you can formulate detailed hydration strategies to counter-act sweat rate, ambient temperature, and relative humidity if the event dictates it, this of course is less applicable to a 5km running race.

Lots of content here but hopefully some of it has proved useful! Regardless of your competition, it’s important you find a strategy that works for you, and one that you are confident gives you the best chance of success.