Infrared vs Compression - The Deep Dive

When it comes to performance and recovery clothing, infrared and compression garments are often lumped into the same category, but that’s not quite right – they’re very different technologies that offer a unique set of benefits to the user. At KYMIRA we make both types of garments, but they’re not one and the same. In fact, it’s unfair to both technologies to consider them as interchangeable.

In this article we’re going to assess infrared and compression technologies, show what the science says and how you should be using each type of garment to get the most out them. There’s a good possibility that at the end of this article you’ll have learned a lot of new information on both!

How Infrared and Compression Garments Work Together

Infrared works by converting wasted energy into infrared light and then emitting it back into our bodies. Rather than re-explain the technology, I’ll simply use the already comprehensive explanation from our website…

Our KYnergy® Infrared embedded fabrics feature specially designed fibres which contain carefully selected natural minerals. These minerals are selected for their ability to absorb otherwise wasted energy from the wearer and surrounding light. The energy is then converted it into a targeted region of the infrared light spectrum, which causes an array of positive biological changes.

Our KYnergy® Infrared technology absorbs the natural shorter wavelength, higher energy radiation that is given off by our own bodies and elements such as visible light in our natural surroundings, and the minerals in our fibres convert it into infrared light which is then emitted back into our bodies.

Compression garments work by compressing the skin and muscle tissues. The claim then is that this acts as a form of low-level massage and helps to improve blood flow in the localised areas, which then has a knock-on effect of improving exercise form, tissue health, reduced feelings of delayed onset muscle soreness (DOMS) and even improving sporting performance.

Unfortunately for compression garments, the science only backs up a limited amount of these claims, as we'll go on to discover in the article.

The Scientific Proof of both

As an evidence-based company, we’re always sure to only make claims backed up in the literature. If we can’t offer credible evidence in support of our claims, we don’t make them. Thankfully when it comes to the benefits of infrared technology, there’s an overwhelming weight of evidence in support for our claims.

In fact, the evidence in infrared’s favour is so strong that all Celliant based KYMIRA garments have been certified as class 1 medical devices in Canada, the United Kingdom, the European Union, Australia, New Zealand and Japan.

Evidence in Support of Infrared

As mentioned earlier, if we’re going to make claims about the effectiveness of the products, we need to be able to providence evidence that they’re true. Here’s a selection of the proven benefits of infrared with the references to each study provided.

One of the benefits of infrared is an improvement in strength and power. In a study by Gordon et al (2019) [1], wearing infrared garments improved grip strength by 12.44%. This localised strength improvement could be easily transferred across other areas of the body if infrared was worn in other areas.

Thanks to the improvement of blood flow attributed to the infrared technology, one would correctly assume that it would benefit endurance athletes as well. Studies have shown that at lower intensities cyclists wearing infrared consume less oxygen, making them more efficient and able to perform better for longer [2]. These benefits are applicable across all endurance events.

Recovery is so much more than just repairing soft tissues after exercise – there’s a neural and hormonal element as well as structural. In the case of infrared, there is evidence [4] that it helps to stimulate a neuromuscular recovery from exercise as well, which is incredibly important for athletes who use strength as well as speed in their sports. Further hormonal and muscular recovery evidence can be found here [5].

One of the key elements of post exercise recovery is the removal of DOMS (delayed onset muscle soreness). This muscle pain that is brought about by microtears in the muscle caused by exercise and movement can be debilitating and have an adverse effect on performance. Infrared has been show conclusively to be an effective method in both helping to prevent DOMS and remove the symptoms post exercise [6].

Studies assessing the Effectiveness of Compression

The scientific support of compression lends itself more towards the biomechanics of the athlete, improving joint support etc, but from a recovery and physical performance point of view the evidence is rather lightweight [7].

There are loose claims of improvement from a recovery standpoint, but the evidence is hypothetical and the claims are empirical. There’s always a placebo effect that can bias a study of course, but until the mechanisms by which compression garments work are entirely clear and proven, it remains a technology with slightly dubious claims – very little of the evidence in the meta-analysis showed any significant performance improvement across either endurance or resistance exercise.

There are cases where blood flow improvement is recorded [8] by compression garments, but these aren’t associated with dramatic improvements in performance within the same study. This may be down to the nature of the improvement of blood flow.

Meta-analysis [9] also shows that there may be some post-exercise recovery benefits, but they aren’t as strong as the infrared. In terms of sporting improvements the results aren’t significant, but there was evidence of strength improvement – this is likely down to the compressive nature of the clothing helping the athletes with strength movements due to biomechanical support.

The lack of sporting improvement is further evidence by this study involving compression garments and cyclists [10], where compression was said to have a ‘trivial’ improvement on power output, but no difference on blood lactate or perceived soreness.

To conclude on the literature surrounding both infrared and compression, the infrared has wide-ranging and statistically significant benefits that can be traced, explained and repeated for use across a broad range of modalities, including sporting performance, exercise recovery and medical applications.

Compression has some evidence in support of blood flow improvement claims, but in terms of sporting improvement and recovery benefits the claims are rather dilute and are difficult to explain given current scientific understanding. The overwhelming likelihood is the sporting improvement seen via compression will be linked to a limited range of strength movements rather than all-round performance.

Whilst compression has been around for a long time, it’s a very different technology to infrared and although it makes similar claims to infrared, it falls short when held up to rigorous scientific scrutiny when tested on performance and recovery claims. 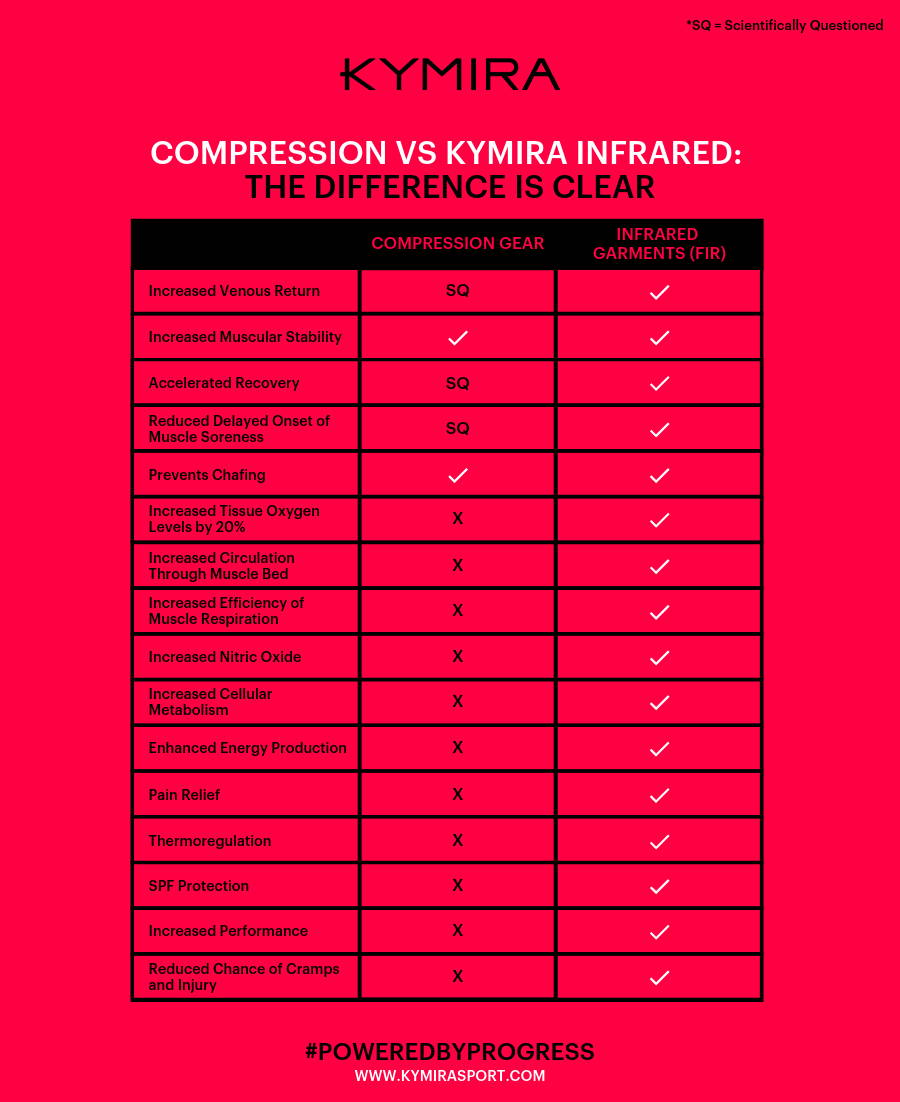 Given the evidence claims against compression, it may surprise readers to learn that yes, we do. But we make them for a very specific reason.

We believe that when it comes to compression, the real value lies in the support of biomechanical structures, so we make compression socks that will help to support to feet of cyclists and runners who are exposing their feet to huge amounts of work. The compression socks will support the foot across the hundreds of thousands of steps/pedal strokes, all the while delivering the performance enhancing benefits of the infrared technology.

For outright sporting improvement we’d always suggest you stick to infrared, because there’s little in the way of comparison from an effectiveness point of view.

If you want to improve performance and recovery, choose infrared. If you want to support your feet for running or cycling, choose compression. If you’d like the benefits of both in one item, pick the compression socks from KYMIRA.

For general exercise or team sports, compression is likely to be too restrictive to allow you to get the most from your body. With restricted range of movement you’re limiting what you’re able to do and you simply don’t get the improvement in performance to justify the trade-off.

With infrared, your range of movement is actually improved and as the evidence referenced in this article shows, you benefit from a wide range of performance and recovery enhancements as a bonus.

At KYMIRA, we have some new exciting innovative technology; check out the new K-Mask here